With an artist name like “Follow The White Rabbit”, it’s no surprise that I’m an Alice In Wonderland fan.  😛  But I’m also a huge Tim Burton fan.  And now my life is almost complete because Tim Burton is directing the new Alice In Wonderland movie (released in 2010) AND some of my friends are working on it!! The movie looks gorgeous, I really can’t wait to see it in the theatre!

Check out these awesome images that have been released: 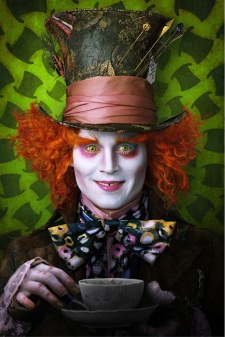 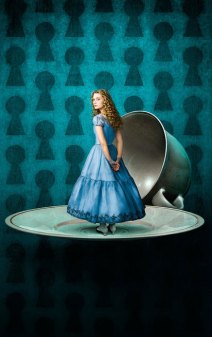 [Johnny Depp as the Mad Hatter & Mia Wasikowska as Alice]

Alice in The Garden of Live Flowers. If you look closely, you can see faces in the flowers!

Tim Burton is my favourite director of all time. He started out as an Animator at Walt Disney Studios, and worked his way up to become a Director.  His resume has lots of my favourite movies on it (The Nightmare Before Christmas, Edward Scissorhands, Corpse Bride, Ed Wood, etc).  What I love about his movies is that he’s not afraid to push the boundaries when it comes to artistic direction (even if his story arcs aren’t that strong).  I can’t name another director who is either that daring or trusted to go for a super unique look.  I also love his gothic twist on things.  He truly is a brilliant and inspirational artist. 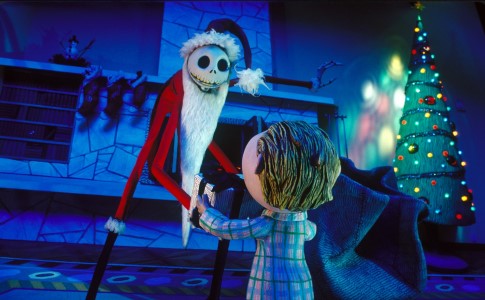 Jack Skellington as Sandy Claws in The Nightmare Before Christmas (1993)

You can tell that he takes a lot of inspiration from German Expressionism, which characteristically have amazing sharp bold shapes in their sets and lighting/shadows.  German Expressionism portrays the emotion of a scene/situation with stylized cinematography, instead of it being portrayed through character or dialogue.  Another influence I’ve noticed is the name of the villain in “Batman Returns” is “Max Schreck”, which is the same name of the actor who plays Count Orlok in “Nosferatu”!  (Yes, I’m a total film nerd.) 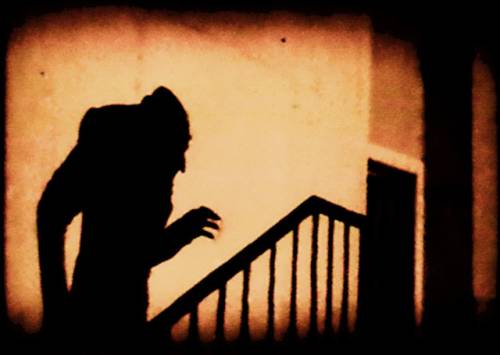 This is a still from the movie Nosferatu (1929). You can see the tone, emotion and intent in this shot just by the light and shadow cast on the wall. The German Expressionists were masters at this art form.

A few months ago I was having lunch at my favourite restaurant Royal/T when all of a sudden Tim Burton walks in.  I look over and totally had one of those movie moments where everything was playing in slow motion.  Tim Burton was silhouetted in black by the bright light that was shining in from the door behind him.  He walked past me and sat down at the table diagonal from us with his lunch party (with most likely his production staff).  I was in shock — I couldn’t move!  I couldn’t think!  And I coincidentally was wearing my Nightmare Before Christmas hoodie, too!  lol.  I’ve never had a fangirl moment like that with any other celebrity, but I did with Tim Burton.  haha.  😛 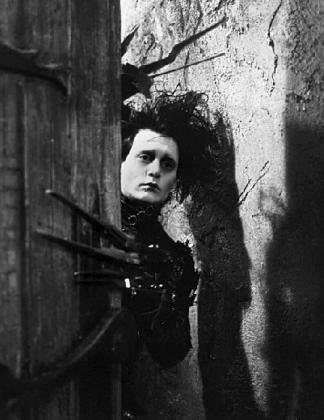 If you’d like to read more about Tim Burton, visit his official website (which unfortunately isn’t that great) or The Tim Burton Collective (lots of great info).  For those of you in NYC, he will be having an art exhibition at MoMA from November-April!   He will also be releasing “The Art of Tim Burton” book soon (which I absolutely must get!!)!  Also, Lenny’s Alice In Wonderland site is a great resource for anything Alice (e-books, pics, trivia, etc), one that I use almost all the time!

I’ll end this post with one of my favourite short films titled: “Vincent” (1982), directed by Tim Burton and narrated by Vincent Price.  Check it out if you haven’t had a chance to see it yet.  Can you tell what film style this short film was inspired by? 😉

Today I wanted to talk about the new piece of art I just bought from the fantastic artist Cecy Meade!  The other day I was perusing the Bear & Bird Boutique & Gallery (where I will have a piece in their Stitch Wars show this summer), and saw that their current show Made In Mexico was online. I looked through their online shop and saw a beautiful original piece by one of my favorite artists Cecy Meade and immediatly bought it. $20 for an original piece of artwork was more than a deal!  I have been following Cecy Meade on Flickr for a while now (and have been totally blown away every time I see her work), so to own a piece of her artwork equals happiness for me! ♥

This is the piece I bought.  I love the untraditional brown paper, the bright colours and the lines are so bold and confident.  She reminds me of a John Kricfalusi (creator of Ren & Stimpy) style of cute girl.  I’m very happy to add her to my art collection. 🙂

Go and check out the work from the Made In Mexico show that is available in Bear & Bird’s online shop. You just might find a piece of art that is both awesome and totally affordable. 🙂 You can also check out Bear & Bird’s Flickr for pics of the whole show.

I’ve listed two new deer in my Etsy shop, and they’re both in colours that have never been available before!

Elegant Plum Deer
Elegant Plum Deer crochets the most elaborate doilies you’ve ever seen. She makes them for all occasions and even gives them to her friends for their birthdays. Some of her friends have accumulated quite the doily collection because of it.

Early Christmas
I bought an Anna Chambers plush from the Luvable Hugable 2008 show as an early Christmas present to myself.  Hee hee!  Anna is one of my favourite plush artists as well as a huge inspiration, so to finally own an original creation of hers is sooo exciting.  Isn’t he so amazingly cute!!!

My name is Emily and I travel to different countries to work on movies. In my spare time I paint, draw, and sew. My blog chronicles my personal art projects. Click here to read more about me. emily.dohlerknox [at] gmail.com